For the commercial trucking industry, DOT compliance regulations require employers to administer post-accident drug testing when a driver is involved in an accident. This means they will be given a drug and alcohol screening when they’re involved in an accident where someone has died, been injured, or where their vehicle has been towed and a ticket has been issued.

Can The Police Demand A Drug Test?

An employer has the right to demand post-accident drug testing—it’s actually policy, as mentioned above—but police officials do not have that same right. However, they can detain the driver, go before a judge, and get a warrant for a drug test later. If this happens, the employer technically doesn’t have to do their own drug/alcohol test on their driver, since the police’s testing will suffice, but it’s very smart if the employer does decide to go ahead and do it, just to cover all bases. This drug testing should happen within 32 hours of the accident, and the alcohol test within eight hours.

What Happens When Drugs Are Found In Their System?

Investigations will still be done, even if an accident seems like an open-and-shut case. Some situations can be murky. For example, a driver’s drug test could come back positive for amphetamines because they legally take Adderall. Officials might say, “Okay, we know what caused the accident; he was on drugs at the time.” But while the driver may technically have drugs in his system, he may have done nothing wrong and it may have been a maintenance problem with his truck.

If alcohol or non-legal drugs are found in the driver’s system after the post-accident drug testing, it’s an entirely different story. The driver will be removed from work, and will not be allowed to return until they’ve completed a substance abuse process. 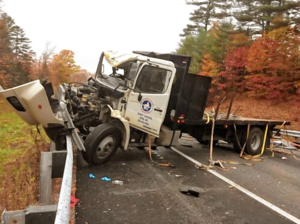 If A Drug Or Alcohol Test Can’t Be Done

If, for any reason, post-accident drug testing can’t be administered in the right amount of time following the crash, the driver (and sometimes the employer) will need to document the reason why the test wasn’t given.

Drivers Must Be Prepared By Employers

The trucking company should make sure that their drivers have the information they need to handle a post-accident situation properly. This means that the company should inform the employee of all information, procedures, rules, and instructions before the driver ever steps foot inside one of their vehicles.

DOT drug and alcohol screenings are enforced to keep the roads as safe as possible, and Consortium Pool makes an excellent partner in this safety. Check out our DOT Compliance page to find out more about FMCSA compliance, drug screenings, and the requirements involved. Consortium Pool provides programs and training for commercial trucking companies and owner-operators. Please contact us if you have any questions!